The word ‘Sadguru’ contemplates the universe as a whole and is present in every tiny bit and particle of this world. It is far too beyond the materialistic world and common human thinking. It is the only permanent and in-destructive element (axiom). This Axiom attains various forms on this Earth in order to make humans realize the eternal truth and lead a happy & satisfied life.

Sadguru Shri Kaka Maharaj is also personifying this Sadguru element today and has lacs of followers and disciples who have found happiness and progressed in their material and spiritual life. He quotes that by chanting the Name of God continuously and by walking the path given by Shri Sadguru, a man can realize the eternal happiness and get truly satisfied in his life.

P.P. Sadguru Shri Kaka Maharaj have been serving the mankind since 1975. Through his discourse (Satsang) he has helped and guided many people suffering from unhappiness, sorrows, ailments, problems, or are victim of the fierce maretialistc race in the world. He says, “One can strike right balance in his spiritual and material life by the above mentioned 2 things i.e. Naam Sadhana and faith on Sadguru. By chanting the name of God along with strong devotion and faith in Sadguru & His teachings, a person can lead a peaceful, fearless and joyous life”. He says that preaching of Shri Sadguru are the need of time.

Shri Kaka Maharaj was born in the small village of Anjarle on the auspicious day of Shri Dattajayanti. He was born to the fortune as the eldest son in a Chitpavan Brahmin family of Mr. Anant Vaidya and Mrs. Usha Vaidya and named Shripad. The family of Shri Vaidya had descended Datta Bhakti (worship of Lord Datta) since many generations and no wonder that little Shripad was fond of Datta Bahkti since age of four. The early childhood of Shri Kaka Maharaj was spent in hardships, pain and suffering both mental and physical in Pune. Even then Maharaj managed to educate himself and secure a good job in a reputed company.

Shri Maharaj got married in the year 1973 to Ms. Jayashree Shankar Damle now for us “Sou. Kaku Mauli’.

During this time the family of Shri Anant Vaidya went through a very bad phase with a big plight taking toll of the family. There was no way out from these very treacherous times, when the family came across Shri Gadbole Maharaj, sadguru of Shri Kaka Maharaj. He single handedly with his divine power sorted out all the troubles punishing the sinners and restoring happiness in the Vaidya Family.

Then in the year 1975, Shri Gadbole Maharaj asked Shri Maharaj whether he was ready to take the divine powers (diksha) that he had and carry forward his work to which Shri Kaka Maharaj consented. After resigning from high salaried Job, Shri Kaka Maharaj went to Kokan in the same year as directed by Shri Gadbole Maharaj and spent 7 years there. In the mean time Shri Maharaj begot two daughters. During his stay in Kokan thousands of needy people virtually from all castes and sects took amazing experiences and cures from him and regained health and happiness in their lives.

In the year 1981 he came back to Pune. And in few months Shri Godbole Maharaj demised. It was a tough time for his family financially but the family fought hard with Shri Maharaj continuing his service to people as promised to His Sadguru.

In 1986, he build a small house at Anandnagar, Sinhagad Road in suburbs of Pune. One night Lord Shri Dattaguru appeared in the dream of Shri. Maharaj and asked Shri Maharaj to give some space to him in his house aslos detailed the measurements. Immediately a small temple of Lord Shri Dattaguru was built in 1987.

In 1988 Shri Sai Baba, appeared before him and Shri Maharaj decided to build a temple of Shri Baba on the 1st Floor of his house which he brought into reality within no time. He stared with aarti and Discourse in the temple. The symbolic difference about this temple premises is that it is open to types of persons irrespective of their caste, religion, race, sect, sex etc. There is no place for unnecessary ritualism, Godly orderliness or superstitions here at His place. It is simple logic of love towards Humanity and the living. He has inculcated positive vibes into people down with physical or mental agony and inclined them to the path of spirituality in its true meaning.

Presently the Discourses are conducted on Tuesdays. Discourses are a different experience of all and is pleasure to attend and hear him. There is no difference of caste, religion, creed, race at this forum. A novel thing is that even people attending are given opportunity to express thoughts. This discourse is well reflected in the CD versions and Amrutdhara, the book by Shri Kaka Maharaj.

Shri Maharaj has diverted many people from performing black magic or acts of blind faith, animal sacrifice and also to keep away from the defrauding sages and proclaimed wise men. He has also curtailed many from various addictions.

This site is dedicated by the trust to this legendary & extraordinary Man, who is still unknown mystery to all and who has walked the hard way of life but lived for others following the one within, his Sadguru.
May Shri Kaka Maharaj bring peace and happiness to your life
// Jai Sai Ram // 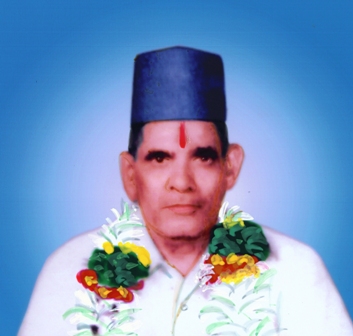 P.P. Sadguru Shri Gadbole Maharaj, Sadguru of Shri Kaka Maharaj, took birth in Konkan, but migrated to Pune during his early childhood. Shri Gadbole Maharaj had very difficult childhood; still he worshiped ‘Lord Shiva’ for 12 years at Pataleshwar Temple in Pune. His penance of 12 years reaped fruits and he was bestowed with the divine realization of the truth carving the Golden niche to his life.

He strived for the betterment of human being throughout his life. He was one person with foresight, modern view and vision and was never suppressed with thoughts of the old school. He made lives of thousands smiling and merry. He had a very attractive and pleasing personality.

P.P. Shri Kaka Maharaj says that Problems are never ending for a man. Instead of running away from them by Chanting Naam you can courageously face any problem and find a way to overcome them. The Name of the God will mend you live a happy life and unafraid of the troubles in life. This courage and strength is not availed from the blind faith or black magic or by causing trouble to others or by sacrificing animals to God. He preaches to walk the advice of Shri. Sai Baba who told every man to behave with other man as a human being and also to think about the happiness of others along with our own. The true path of life is to make other people happy. This happiness on the face of the other person will give you true joy and satisfaction. Satsang is the only way a person can transform from within to this state of mind. Hence SATSANG of Shri Sadguru is inevitable to live life in true sense.

There should be no show off while chanting the Holy Naam, it should be done with complete dedication. Shri Sadguru gives us everything but we don’t realize that, till our last breath what treasure he has given us. The treasure of Shri Sadguru is unlimited.

Shri Sadguru is not bounded by months, years or even Century; in fact, He is not bound by time. For the betterment of Mankind Shri Sadguru and Sage are incarnated again and again. Even if the name and body are different the principles of Shri Sadguru are the same in different incarnations. Shri Sadguru has everything in abundance and thus they are always giving to all. Shri Sadguru is a liberated soul but for us to feel at ease with Him, He looks and lives like all of us.

The moment we devote ourselves at the feet of Shri Sadguru we accept his teachings in totality. By doing this we experience total transformation in the way we think, act, and perceive. The entire credit of our being is given to Shri Sadguru, thus shedding our ego. Once we get rid of our Ego, we realize the true Sadguru. But for this complete devotion is must, and also the realization of giving the credit of everything to Shri Sadguru.

Shri Sai Baba always says, “Allah Malik” (Allah is the Master). Shri Sai Baba was doing everything, but He used to give the credit for everything to Allah.